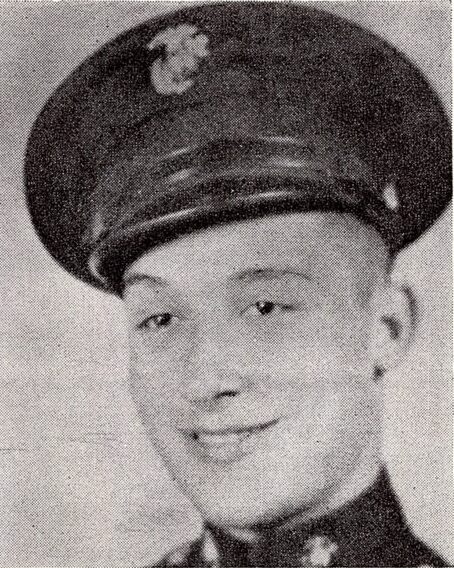 Private First Class, CARMEN SQUILLANTE KIA 314404, USMC. He was wounded on October 27, 1942 died of wounds received in action in defense of his country on November 5, 1942, on board the U. S. S. Hornet, during a naval engagement off Santa Cruz Island in the vicinity of Solomon Islands. The aircraft carrier, Hornet, was sunk. Private Squillante was the son of Mr. and Mrs. Anthony Squillante of Bay Shore, and he was born in Long Branch, N. J., on July 29, 1922. He moved to Bay Shore with his parents in 1932 and attended the Bay Shore High School. Before enlisting he was employed by MacDonald’s Service Station on Union Street. In June 1941, he enlisted in the United States Marine Corps and was sent to the Marine Sea School at Portsmouth, Va. After graduating, he was assigned to the USS Hornet as a gunner and held that position until his death. On June 30, 1943 he was awarded posthumously the Purple Heart, the American Defense Service Medal and the Asiatic-Pacific Campaign Medal, Marine Corps Good Conduct Medal, Marine Corps Expeditionary Medal, World War II Victory Medal, Combat Action Ribbon, American Campaign Medal, Marine Corps Presidential Unit Citation. He is surviving the young hero are his parents, three brothers, Rudolph, Sam and Anthony, and two sisters, Mrs. Madeline Panuska and Miss Rose Squillante.