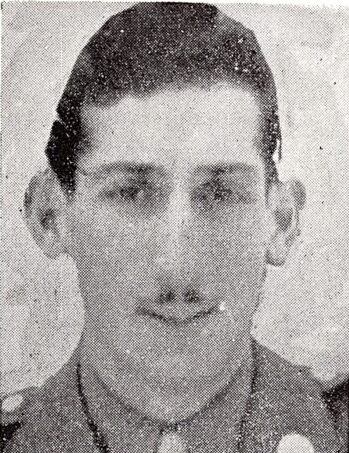 Sergeant ANTHONY SQUILLANTE, JR. 32401283, US Army son of Mr. and Mrs. Anthony Squillante, Sr., and brother of Private First Class, CARMEN SQUILLANTE KIA, Private RUDOLPH J. SQUILLANTE 42138294, and Corporal SAMUEL C. SQUILLANTE 32970080. He was born on April 9, 1920 in Long Branch, N J. He attended Bay Shore High School and was inducted into the U. S. Army on July 21, 1942, at the age of 22. He was attached to the 349th Infantry, he served as a mechanic at Camp Gruber, Okla., and then as a member of the 88th Infantry Division Blue Devil Division in the Naples-Foggia Campaign in Northern Italy. He was awarded the Mediterranean Ribbon with Three Battle Stars, the Infantry Combat Medal Badge, the E.A.M.E. Campaign Medal, the American Campaign Medal, the Good Conduct Medal and the World War II Victory Medal. On November 22, 1945 he was discharged.