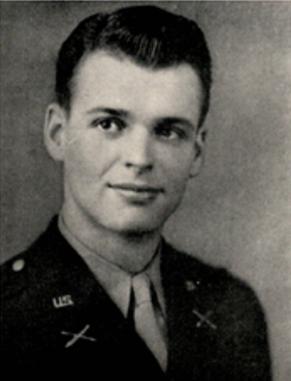 First Lieutenant DAVID HAROLD SCANLON, U. S. Army. He is the son of Mr. and Mrs. Edward Francis Scanlon, of 4312 Coliseum Street, New Orleans, Louisiana. He was born December 9, 1921, and attended Alcee Fortier High School and Louisiana State University LSU. Inducted October 16, 1942, at the age of 20. He received his training at Fort Sill, Oklahoma, and later being commissioned July 29, 1943, he was assigned to the 99th Infantry Division, Field Artillery. On September 29, 1944, he embarked for the European area where he served in England, France, Belgium, and Germany, and he participated in the Rhineland, Ardennes, and Central Europe campaigns. Lieutenant Scanlon was awarded the Purple Heart Medal (PHM) April 16, 1945, for wounds received in Germany, and he has also the Air Medal, the European Theater of Operations (ETO) Ribbon with three bronze stars, the American Theater of Operations Ribbon, and the Victory Medal. He was honorably discharged January 24, 1946, at Camp Shelby, Mississippi He is the husband of Claudine O’Neal Scanlon, Pineville, Louisiana.