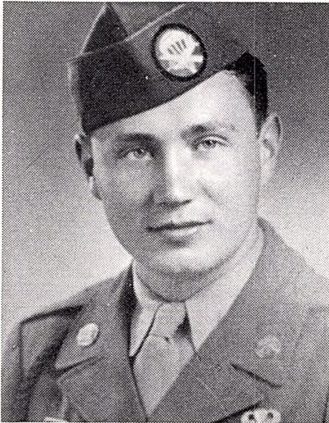 Corporal DONALD B. BAXTER, US Army Paratrooper Rifleman. He was born Nov. 15, 1923, in Rushville Illinois, he was the son of Herman Baxter and Mary Sargent Baxter. He married Esther Bader on June 28, 1948, in Bader. He served in the 504th Parachute Infantry Regiment, 82nd Airborne Division. He was a 1949 graduate of the University of Illinois, he taught chemistry and science at Red Bud, Wyoming, Woodstock and Bradley-Bourbonnais schools. He was a member of Grace Baptist Church of Kankakee. Donald B. Baxter, died at 9:45 a.m. Saturday, April 29, 2000, at Riverside Medical Center in Kankakee. He was awarded the Purple Heart Medal, American Theater medal the European Theater medal with one bronze star for the Central Europe campaign and the Army of Occupation in Germany and One overseas bar.